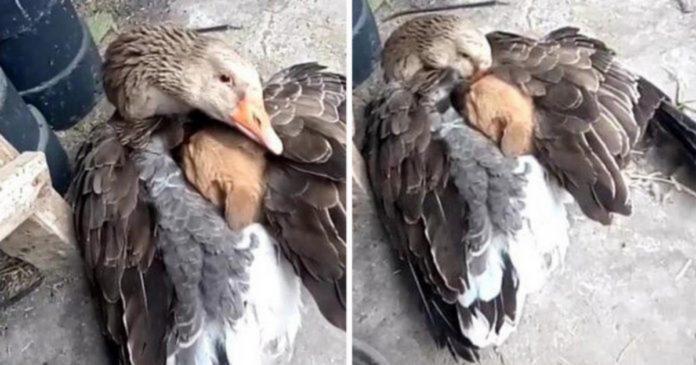 Empathy is universal among humans, but when it’s witnessed among animals of other species, it’s something truly beautiful to behold. You often see the same level of care that a human mother gives her children in animals with their offspring, but how often do you see it among different types of animal?

Well, that’s what this mother goose did after coming across an abandoned puppy which would have frozen to death.

Regardless of the goose being a goose and the puppy being a puppy, the two formed a maternal connection as witnessed in the gooses care for a puppy who was dependent on her for survival. The photos of the two cuddling are beyond adorable and worth sharing with friends and family during these polarizing times.

A hiker spotted the scene of the puppy cuddled up with the goose and couldn’t help but take some photos and share them on social media. It didn’t take long for them to go viral. As for the puppy, it’s believed to have been abandoned by it’s mother shortly after birth, and it was incredibly lucky to have come across such a caring mother goose.

Despite the puppy not being one of it’s own, the mother goose expressed empathy and knew that if she didn’t intervene, he was going to freeze to death. So she takes him (literally) under her wing and holds him close to her body to share her body heat with him to keep him alive.

You can tell the mother goose is quite protective of the puppy, laying her head lovingly on his back while keeping a lookout for danger. You can tell she truly cared for him as if he was one of her own.

Since being posted, the photos have gone viral across Facebook and several Chinese social media platforms. One of the original Facebook posts had over 235,000 shares in under six hours with the following caption:

“A man finds a goose that was shaking with cold stuck to a pole in Montana. When approaching, the surprise is capital. The goose was sheltering with her wings a puppy that was about to die frozen.

We have so much to learn as a species …”

Since we don’t know who the original poster/photographer is, we’ll never know just how accurate this story is.

Either way, the photos bring about a sense of wholesomeness and empathy which we hope to see in everyone around us. We could all learn from this mother goose.

Dog Runs Straight To His Bed When He Returns Home

Shelter Dog Gets The Zoomies After Learning He’s Been Adopted

Mexican Man Shelters 300 Dogs From Hurricane Delta In His Home